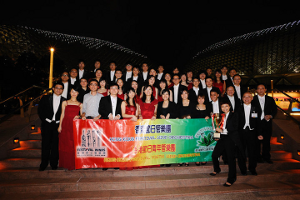 Outstanding Musicianship of HKFWO Performance Results The Championship in SIBF 2010

The Hong Kong Festival Wind Orchestra will make its second appearance in Korea, participating in the 9th Cheju Summer Band Festival this in August. The Festival, under the theme of "Island, the Resonance of Wind!" will feature an ensemble festival, an international brass competition and the Conference of Asia & Pacific Band Directors' Association (APBDA).

The HKFWO is exciting to join this meaningful Festival that we can contribute to promote and develop friendship and understanding between the people of Jeju and Hong Kong. HKFWO will present two performances in Jeju Seaside Arts Center and Jeju Culture & Art Center on August 13 and August 16 respectively. We are also honored to have the renowned clarinetist, Mr John Albert Koljonen, to perform the Concertino for Clarinet by Carl Maria von Weber with us in the Festival.

Invited by the All Japan Band Association to perform in the" 49th All Japan Band Contest - Miyagi Prefecture" and Joint Concert with the Golden Award winner Tohoku Gakuin University. Performed in the Tokyo Disneyland.

Performed in the Sydney Opera House in the 10th APBDA biennial convention held in Australia.